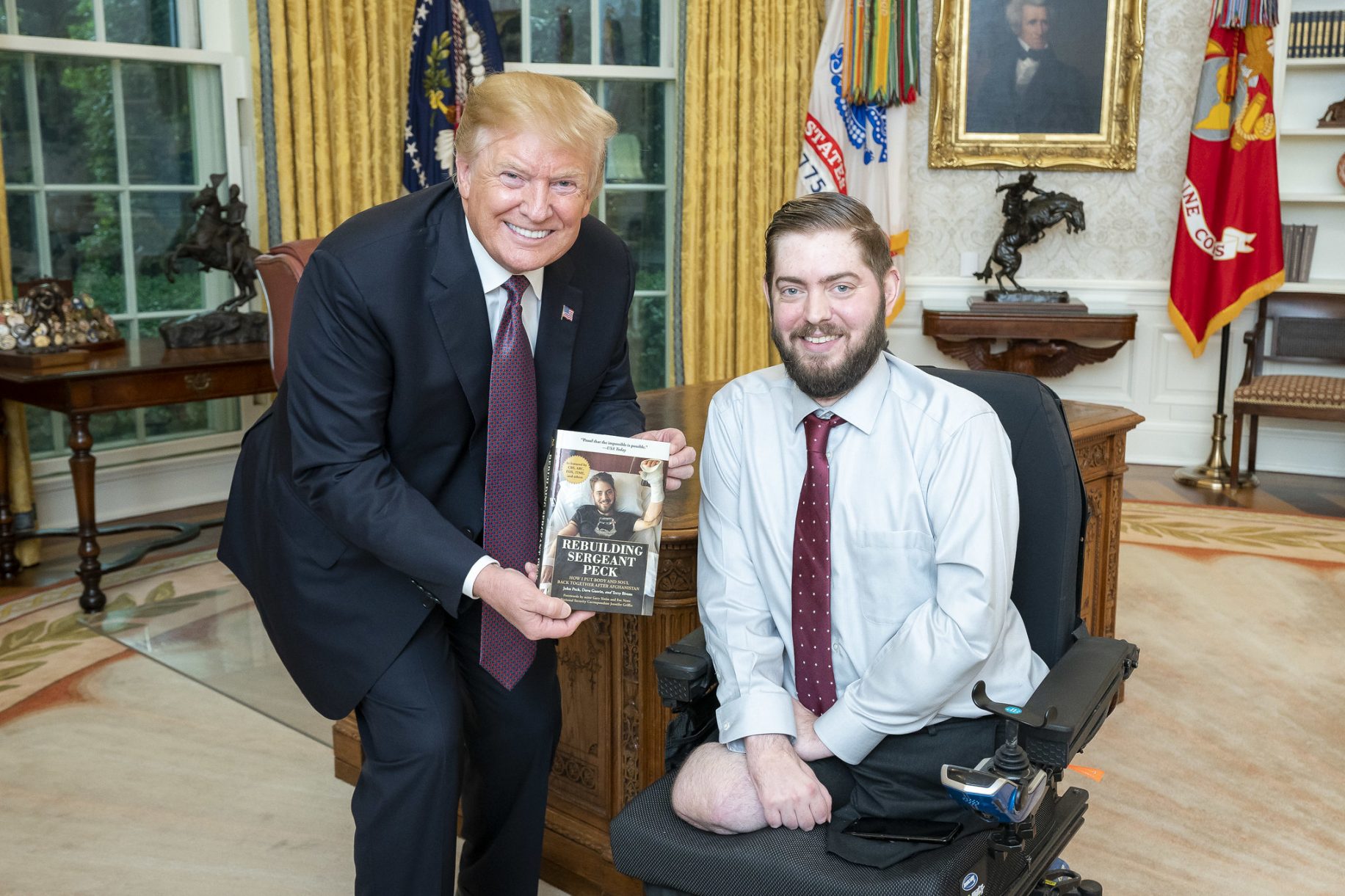 On Tuesday, President Trump met with U.S. Marine veteran Sgt. John Peck in the Oval Office, accompanied by his wife, Jessica. Peck is a quadruple amputee

Peck is a quadruple amputee who received a double arm transplant at Walter Reed in 2017 after losing his limbs to an IED in Afghanistan during 2010.

Trump tweeted, “I met Marine Sgt. John Peck, a quadruple amputee who has received a double arm transplant, at Walter Reed in 2017. Today, it was my honor to welcome John (HERO) to the Oval, with his wonderful wife Jessica. He also wrote a book that I highly recommend, “Rebuilding Sergeant Peck.”


https://twitter.com/i/web/status/1128076346184404994
Trump recommended Peck’s new book titled, “Rebuilding Sergeant Peck: How I Put Body and Soul Back Together After Afghanistan,” which was released May 7.

In 2007, Peck was in Iraq and was struck by an IED. Peck survived the injury, but his memory was erased. He didn’t even know his name, Fox News reported.

Peck came back to the U.S. and endured two years of physical therapy and training.
Even after everything he had been through, he re-enlisted and went to Afghanistan to serve another tour.

Peck fell into a dark depression after the accident and then his wife at the time left him.

In a short time later, he fell in love again, got married, and in 2016, he got a double-arm transplant.

Peck said the “long, grueling surgery” lasted around 16 hours and involved more than 20 doctors shuffling in and out of the operating room.

With help from Gary Sinise, Jennifer Griffin, and Bill O’Reilly, John received an “Action Trackchair” wheelchair and a newly built Smart Home to help him get restarted, Fox News stated.

Peck is still in recovery but is also a motivational speaker with dreams of one day being a chef.

“My doctors are definitely scared about that. I am able to hold a knife and they are scared that I’m going to chop off a finger but one of my nurses, he’s like ‘hey let’s go skiing, we can put you on a ski’. And I’m like ‘I would break an arm, but you guys are afraid of me like doing a little paper cut’,” Peck said.
You must log in or register to reply.
Share:
Facebook Twitter Google+ Reddit Pinterest Tumblr Email Link