America’s Back Is Against The Wall 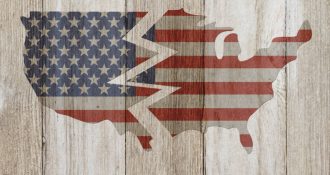 ​
Some of You out there are so anti-Trump, You would destroy the Republic rather than give him any credit for trying to save the Republic. I get it. I stand against him on some issues myself.

But to castigate him for upholding existing immigration laws and trying to provide border security, build the wall and more is just insane. You castigate him for using U.S. LAWS that CONGRESS PASSED, IN THE SAME EXACT MANNER THAT ALL PREVIOUS PRESIDENTS HAVE DONE.

He had the absolute Righteous and Legal authority to act within His National Emergency Powers as President of the United States.

And then when I go into detail on the topic You attack me as having “been played”. If You cannot discuss this topic or any other topic on the merits of the facts without focusing on me, The Messenger, JUST LEAVE.

I used the catch-phrase and self-identified as “Never Trump” in only one article, when I was supporting Senator Ted Cruz, only to drive home the point on how opposed I was to his candidacy. And as I previously noted, I find him weak in some areas, especially pertaining to the Bill of Rights.

Seeing what would have been in his place had he lost — from the weak-kneed Never Trumper status quo establishment RINO types to the Red, Radical Communist Hillary is enough to give anyone the hebbie-jebbies.

And in the meantime, IF ONLY ON THIS ONE ISSUE, PRESIDENT TRUMP IS DOING AN OUTSTANDING JOB, ONCE ONE CONSIDERS THE RYAN BETRAYALS AND SO MANY OTHERS WITHIN THE PARTY THAT IS SUPPOSED TO SUPPORT HIM — WHILE ALSO WITHSTANDING WITHERING ATTACKS FROM THE COMMIE DEMOCRATS.

Keep attacking Trump when it is certainly unwarranted, and You will be aiding the Democratic Party and adding one more step towards a Commie takeover of America, placing all Americans' backs against the wall trying to fight off the ensuing tyranny.

Never in all my years did I ever think I would see so many Americans completely turn their backs on everything good and decent, that our country was founded and built upon; from honoring our Judeo-Christian roots and our philosophy that emanated from the Western Enlightenment and the Christian Bible to our God-given Rights and Life itself and the idea that marriage is between one man and one woman, and on to our freedom, the Constitution, our national sovereignty and God Himself.

“What has happened to our country? We elect Muslims who want to impeach OUR President, we want our children born without an identity, we allow thousands of people to cross our borders illegally — committing heinously evil crimes — we call a Wall immoral, and yet we condone ripping babies piece by piece out of their mother's womb. How much more immoral can we become?

We cry for compassion as homeless Veterans and seniors suffer, yet we have compassion for invaders who are here illegally and will never serve or pay a dime.

Americans need to STAND UP and take this country back. The time for talking about it is OVER.” ~ Ed, an American Patriot.

Yes … little by little … and now at breakneck speed, the Red, Radical Democrats have always intended to destroy our Republic, since 1913, at least, and they are on an all or nothing all-out effort to complete its destruction, using tactics they sweetly refer to as “transformation”. Evil comes like a thief in the night, and it has overcome America at the moment.

We must pray for America and help God help Us, by fighting back with everything we've got, peacefully if possible and to the death if necessary; failure is no option.

Fire with Fire … By ballot or bullet … at this point, I care not which … I aim to keep this America I love so well free. I owe it to my Children and Their Children's Children.

The post America's Back Is Against The Wall appeared first on iPatriot.

Not just the radical Dems but the radicals in the GOP as well. When looking back to1913 remember the "progressives" like Teddy Roosevelt were active then. The 18th and 17th Amendments allowing the income tax and direct election of Senators, Prohibition, and creation of the Federal Reserve were all from that era and largely GOP creations.
Reactions: Conservative Angle and TPcat78
You must log in or register to reply.
Share:
Facebook Twitter Google+ Reddit Pinterest Tumblr Email Link