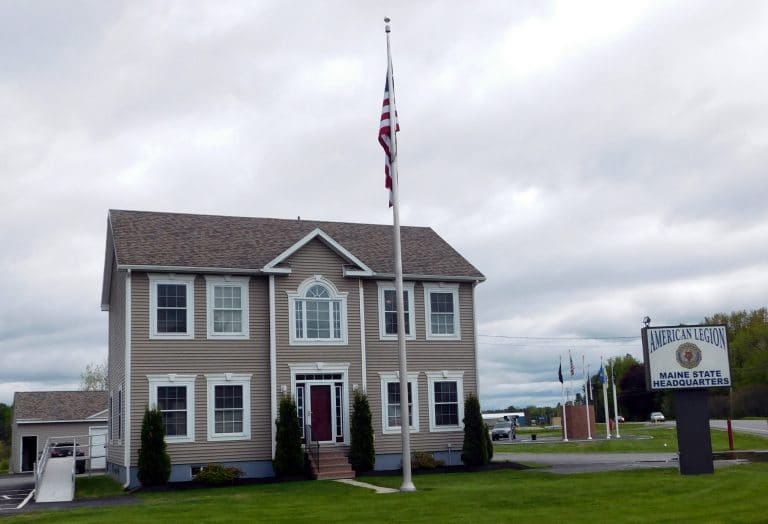 Caroline Yarmala’s first-ever marathon was a meaningful one — to more than just her, she hopes.

Yarmala ran the virtual Boston Marathon on Saturday using a bib belonging to Michelle L’Heureux, a survivor of the 2013 Boston Marathon bombing who has become a friend of Yarmala’s through the American Legion. Yarmala is a Navy veteran and Legion member, while L’Heureux’s father Paul is a longtime Legion member and administrator.

“So far, every year the (Boston Athletic Association) has been so kind in offering survivors bibs — and sometimes a guest bib — and it’s really great to be able to use that to raise money for different organizations,” said L’Heureux, who grew up in Auburn but now lives in Milton, Massachusetts.

“Last year I raised money for victims of terrorism in France, and this year we get to raise money for (the American Legion and) veterans in Maine. So it’s a nice way to give back, and I’m so proud that Caroline gets to do this with this guest bib.”

Yarmala was born in Maine but moved around throughout her childhood. She returned to the state when she got off active duty from the military in 2010. She settled in Lewiston in 2013.

“Toward the end, my legs were getting sore. But I knew the finish line was coming,” Yarmala said after finishing at the American Legion Post 202 in Topsham.

Yarmala started Saturday’s marathon in Lewiston at 7 a.m.; she finished her 26.2 mile run shortly after noon.

Vietnam veteran and Post 158 member Armand Marcouillier set up a water station at about the halfway mark of Yarmala’s run. “She is a veteran and we need to support her,” Marcouillier said while standing next to his homemade sign that read “American Legion Post 158 Supports Caroline.”

Yarmala’s late-summer run — which normally would have taken place in Boston on Patriots Day in April — was born from an idea last winter.

“One time (Michelle and I) were together, we were discussing all of her feats and her different experiences running the marathon, and she was looking for somebody to honor with the invitational guest bib to raise money for the American Legion, and somebody mentioned that I like to run,” Yarmala said Friday. “So it kind of went on from there.”

L’Heureux ran the actual Boston Marathon in 2015 — after going through more than six surgeries from the open-blast wounds she suffered two years earlier — and again last year.

“We were sobbing when Michelle finished,” said L’Heureux’s step-mother, Audrey L’Heureux. “Just thinking of it now makes me tear up.”

“You train for it, and you think you know what you’re getting yourself into, but it’s incredibly difficult when you get out there,” L’Heureux said Friday. “You hit the last couple of miles and it’s really mind over body. I know she’s got it in her. So I’m just looking forward to seeing and hearing about the feeling that she has when she completes it, and knowing that she did it for people that she cares about. It sends a good message to people.”

Yarmala said the longest distance she went in training — which started last winter — was 20 miles. Some of her runs saw her go from her house in Lewiston to her parents’ home in Bowdoinham, or from her parents’ house to the American Legion in Topsham, where Saturday’s virtual run finished.

A crowd of people were waiting for Yarmala to finish. Red, white and blue smoke bombs were lit when Yarmala was spotted running the last 100 yards. Mitchell and Holly Brown and their two daughters came to watch Yarmala finish.

“When that woman puts her mind to something, watch out,” said Holly Brown, a co-worker of Yarmala. “It’s so awesome to see her finish because her work ethic at work is the same as what you have seen today,” said Brown. “I am so happy that my daughters get to see her perseverance.”

“Talk about a great role model,” said Mitchell Brown. “I want my daughters to know more women like Caroline.”

“She trained really hard for the Boston Marathon,” Mary Brune said about her friend Yarmala.

Yarmala was not alone in her quest to complete the run Saturday, as many Mainers mimicked the marathon in their own way, establishing 26.2-mile routes in their neighborhoods to complete the virtual race.

In May, the Boston Athletic Association cancelled the 124th Boston Marathon due to the COVID-19 pandemic, and instead announced it would hold a series of virtual events during the second week of September.

Runners who had already signed up for the marathon were refunded their entry fees, and given the opportunity to participate in the virtual event any time between Sept. 7 and 14.

“I know she was grateful to finish and to be able to finish it for a good purpose was a bonus,” said Brune, who served in the same battalion with Yarmala while in the Navy.

“Thankfully with the new way that the virtual marathon run is, there’s no actual timeframe (to complete the race). So we were able to put some more things in there and make it a little bit less of a stress factor on having to make sure I complete the race in this amount of time,” Yarmala said Friday.

Tying in each of the five branches of the military and the American Legion in different sections of the 26.2-mile run was meant to add “a little bit more entertainment and fun with it,” Yarmala said.

American Legion Post 135 members Jim and Tracey Rancourt set up a water station and collected donations on the Crowley Road in Sabattus. When Yarmala arrived, Jon Mennealy took the United States Air Force flag and ran alongside Yarmala until they reached the Sabattus-Lisbon line. Mennealy ran the Boston Marathon in 2019.

When Yarmala reached Marcouillier’s water station on the Lisbon-Bowdoin line, U.S. Rep. Jared Golden was waiting for her with a Marine Corps flag. Golden is a Marine, who served in Iraq and Afghanistan.

The fundraising aspect of the run is near and dear to Yarmala’s heart — and to L’Heureux’s.

Yarmala is trying to raise money for the American Legion Department of Maine Foundation, which her partner, Matthew Jabaut, an Army veteran, helped create.

“We’re very thankful for those who have donated so far for the GoFundMe, and we know that that money is going to such a great cause,” Yarmala said.

Through “the Legion, I have come to find new friends and family, a great camaraderie that I’d been missing after the military. And the Legion mission to help support veterans and their families and the community is just great,” Yarmala added. “And the foundation is going to be providing funding for all those wonderful programs, to keep them going and for the future. So it’s very exciting to be able to be doing this to help raise money for that.”

“I just know that I see a lot of what my father and Matt do when it comes to their involvement in the American Legion,” L’Heureux said. “I’ve been to enough functions to see what it means, just by looking in the veterans’ faces when they’re there. They truly are a family. It’s not just a post to go drink at. It’s a family, they support each other, they do so many good things for veterans. I think more awareness needs to be brought to that. It’s an incredible organization. And I hope this helps people take a better look at it, too. You know, younger generation.”

L’Heureux was not able to see Yarmala run the race. She was completing the Lingzi Dream Dash 5k virtually, which benefits the Lingzi Foundation in honor of Boston Marathon Bombing victim Lingzi Lu.

L’Heureux said Friday that she would be thinking of Yarmala’s run while she completed her own run.

“My daughter could not be here today,” said Paul L’Heureux, who said Michelle was updated on Yarmala’s run throughout the day through social media.

“This brings back the good things, not the bad,” L’Heureux said as he walked toward the celebration cookout at Post 202.