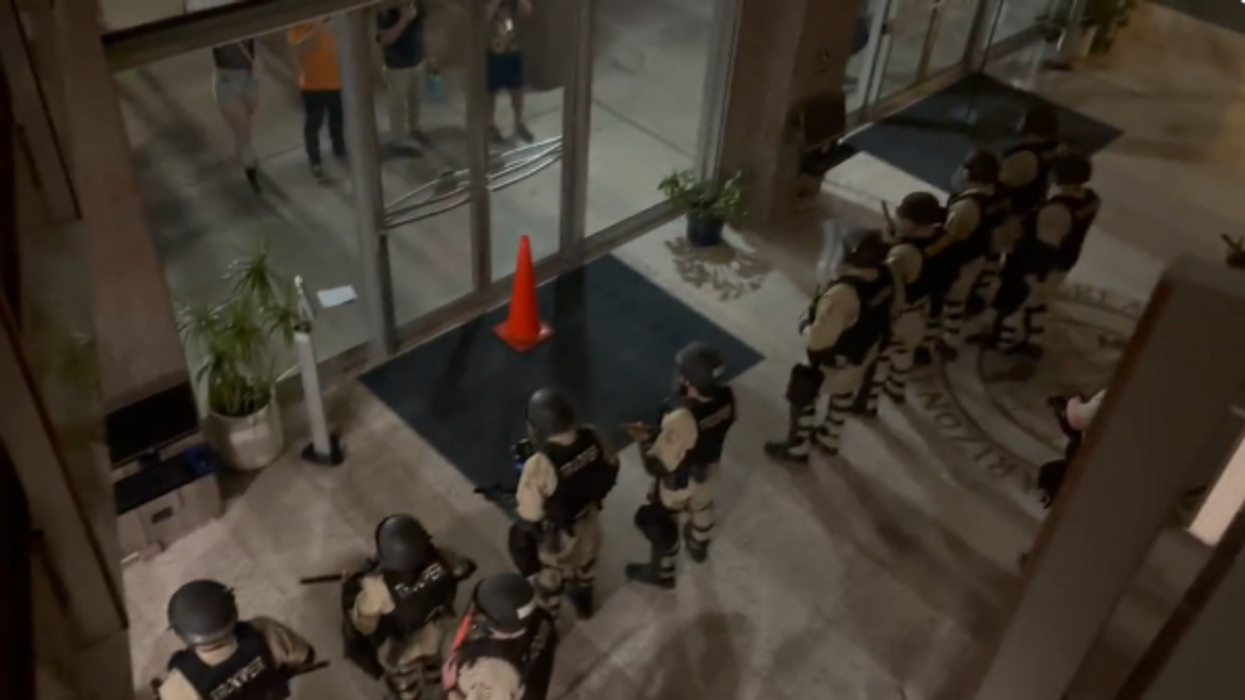 ​
A pro-abortion protest escalated into a tense situation where police had to use tear gas to disperse the mob gathered outside the Arizona state Capitol.

Hours after the U.S. Supreme Court overturned Roe v. Wade on Friday, approximately 8,000 pro-abortion protesters demonstrated outside the Capitol in downtown Phoenix, according to KTAR-FM. The protest began at 7 p.m., and featured protest signs that read: "Keep your Bible off my body," "Why are old men making laws on my body" "forced birth is fascism," "You're killing us," and "my body my rage."

Protesters amassed around the Arizona state Capitol on Friday night – when the state senate was in session.

Republican Arizona gubernatorial candidate Kari Lake shared a video of the mob outside the Capitol with the caption: "The left is showing everyone what a REAL 'Insurrection' looks like right now in Downtown Phoenix. This is domestic terrorism. The Arizona national guard should have been deployed hours ago, @DougDucey Arrest these animals immediately. They are out for blood."

u201cThe left is showing everyone what a REAL u201cInsurrectionu201d looks like right now in Downtown Phoenix.nnThis is domestic terrorism. The Arizona national guard should have been deployed hours ago, @DougDucey nnArrest these animals immediately. They are out for blood.u201d

Department of Public Safety troopers used tear gas to disperse the frenzied crowd outside the Capitol.

u201cDPS used tear gas and people went running away from the Capitol. People coughing and now DPS is telling people to disperse. Protestors were banging on the Capitol windows [email protected] nn#Phoenixu201d

Department of Public Safety told AZ Family reporter Michael Raimondi, "Our troopers were in the Senate lobby in full view of the rioters as they pounded on the glass. We believe they had every intention of getting inside the senate building."

"Troopers deployed gas outside the Senate building after protesters attempted to break the glass," the Arizona DPS stated. "The crowd then moved to the Wesley Bolin Plaza where some monuments were vandalized. Gas was deployed again to disburse [sic] the crowd."

u201cAND THENu2026 Senate immediately bails out because of u2018security situation.u2019 Area outside Senate filled with people protesting Roe decision. They appear to have entered building.u201d

u201cFeeling safe at the Capitol as I sit by 3 of my fellow senators who are armed.u201d

Arizona GOP state Senator Kelly Townsend said, "We are currently there being held hostage inside the Senate building due to members of the public trying to breach our security. We smell tear gas and the children of one of the members are in the office sobbing with fear. I expect a J24 committee to be created immediately."

Townsend later said, "Everyone is okay, and we are finishing our work."

Arizona State Republicans stated, "While the Senate is now secure & safe, unfortunately smoke/tear gas has spread into our chambers."

Senate President Karen Fann issued a statement, "We are incredibly thankful for our local law enforcement who quickly intervened during what could have been a destructive and dangerous situation for our members, staff and public inside the Senate."

Kim Quintero – the Republican Caucus’ communications director – noted, "Violent pro-abortion protestors’ attempts of an insurrection at the Arizona State Senate were thwarted Friday night, thanks to the swift actions from local and state law enforcement."

There were numerous violent outbursts during pro-abortion protests in several U.S. cities on Friday night.