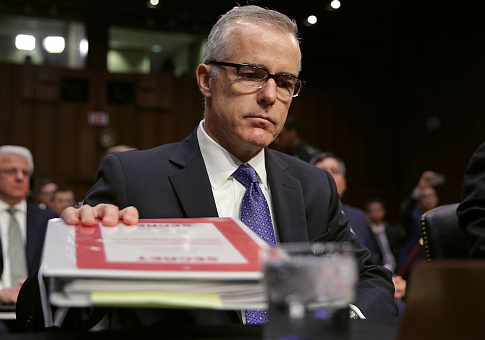 The referral indicates the Justice Department believes there is enough evidence to warrant the U.S. Attorney's office to bring charges of wrongdoing against McCabe, CNN reported.

The referral comes on the heels of a report by the OIG, which was made public last week. The report found McCabe "lacked candor" on multiple occasions with FBI Director James Comey and other law enforcement officials about his unauthorized disclosure of information to the Wall Street Journal. The information disclosed involved the FBI's investigation into the Clinton Foundation.

The OIG report determined McCabe was not authorized to disclose the existence of the Clinton investigation to the Journal but did so anyway to "advance his personal interests at the expense of department leadership."

The OIG's report and an internal investigation by the FBI's Office of Professional Responsibility found there was conclusive evidence to warrant McCabe's termination. Attorney General Jeff Sessions cited both reports in forming the basis of his decision to fire McCabe two days before the latter would have been eligible to retire early with a $1.8 million pension.

McCabe has fired back at the allegations leveled against him, saying they are politically motivated.

The OIG referral comes one day after a group of Republican lawmakers sent a criminal referral to the Department of Justice demanding McCabe, former FBI Director James Comey, Obama-era Attorney General Loretta Lynch, and others be charged for numerous violations of federal law. The lawmakers alleged McCabe, Comey, and Lynch mishandled the investigation into Hillary Clinton and the Clinton Foundation during the 2016 presidential election.