“UN-WOKE Award Of The Week,” Project 21 and Horace Cooper 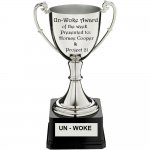 The language of the woke-agenda is casting storm clouds across the American sky. Our shared history, which is one of discovery, genius, tribulation, redemption, and unprecedented advancement, is under attack, not by enemies from without, but from those within. The foundations of the education and media edifices are cracking under the onerous weight of Marxist influences that serve to reduce or eradicate any sense of nostalgia or love a citizen might hold in their heart for our great country. However, in this time of dystopia visited upon us by the Democrat party, there are warriors who stand against them in brave defiance and simply say, “NO,” and we must celebrate them. This week’s winner of the “UN-WOKE Award” goes to Project 21 Leadership Network and its co-chairman, Horace Cooper. Project 21 is a part of the National Center For Public Policy Research.

Project 21 is a pro-American organization, and Horace Cooper is a great American who understands clearly the old adage, “The only thing necessary for the triumph of evil, is for good men to do nothing.” Horace read the “1619 Project” letter and decided that “doing nothing” was not an acceptable response. Mr. Cooper is weathering unimaginable scrutiny because African Americans like him are not allowed to stray from the democrat party line, lest they are ridiculed. We all remember Joe Biden saying, “I tell you if you have a problem figuring out whether you’re for me or Trump, then you ain’t black.” There are far worse things democrats say towards African Americans who dare express an opinion that deviates from their script, but those comments are too offensive. They don’t deserve the ink or time to revisit. See below to hear uncle Joe saying racist things the Democrat media ignores.


Horace Cooper has been very outspoken against the 1619 project and through Project 21 endeavors to instill conservative concepts and free-market principles in black communities and supporting new black leaders who respect those ideals. He calls out the bigotry of the “The Project” and its primary author Nikole Hannah-Jones, who has expressed radical racist views that are entirely ignored by the mainstream media. While in college in 1995, Nicole published a letter in a Notre Dame publication that claimed: “the white race is the biggest murderer, rapist, pillager, and thief of the modern world.” She also called whites “bloodsuckers,” and wrote that Christopher Columbus was “no different than Hitler.” Recently, she expressed pride that the upheaval after George Floyd’s death was being called the “1619 riots.” Horace also took exception to her saying, “destroying property, which can be replaced, is not violence” in reference to the millions of dollars of damage caused by the riots. Watch Horace interviewed on the subject:


The 1619 project, produced by the New York Times to commemorate the 400th anniversary of African slaves arriving in America, is the latest in a long line of Leftist efforts to upend and extinguish the American experiment. According to Nikole Hannah-Jones, contributing author and editor of “The Project” at the New York Times, the aim is to “reframe the country’s history” and erase 1776, the founding date of the United States, and replace it with 1619. Nikole Jones reveals herself as a vacuous distorter of history in the very opening of the 1619 Essay when she states with undeserved confidence that the real reason for the American Revolution was to preserve the institution of slavery.

Gordon Wood, who is a Pulitzer-Prize winning historian and American Revolution expert, described the 1619 letter as “wrong in so many ways.” Northwestern history professor Leslie M. Harris, who was consulted by the New York Times, warned the authors not to publish an inaccurate representation of historical events. Renowned historian and Gettysburg College professor, Allen Guelzo, dubbed the 1619 Project a “conspiracy theory” that seeks to “tarnish capitalism.” The list of historians across the ideological spectrum, who object to the content of the 1619 project, is very long.

Despite outright fabrications and omissions, the 1619 Project has become part of the curriculum in schools in Chicago, Washington, D.C., Newark, New Jersey, and Buffalo, New York. Liberals don’t care about the truth of our founding or that of slavery, and it’s eventual abolishment; they only care about lying to our children and transforming them into future America-hating Democrat voters. Oprah Winfrey has fallen for the distortions contained in fake history written by the New York Times and recently announced that she would bring the lessons of The 1619 Project to film and television.

See here:
https://twitter.com/i/web/status/1287741964876746755
The progress made against the 1619 Project and the false slander and racial discord it perpetrates upon our country, demonstrates why it’s of paramount importance to uphold and honor those who exhibit bravery by challenging the dishonesty and libel of the Left. Again, congrats and kudos to Horace Cooper and Project 21.

Stay tuned for next week’s “WOKE” or “UN-WOKE” award winner.